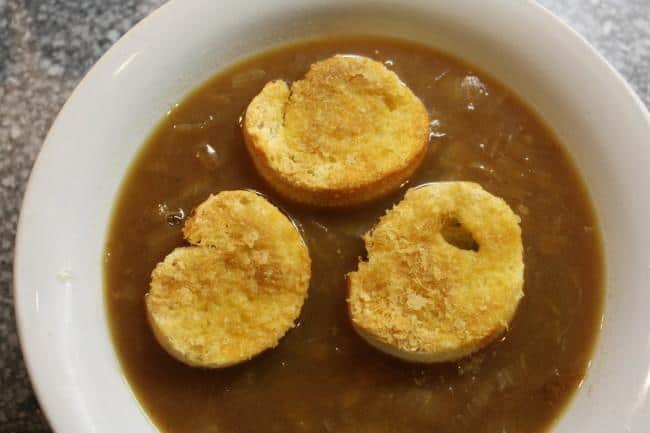 French onion soup – thick, hearty, and bursting with umami flavour, normally from beef broth and cheese.  A vegan nightmare?  Well, not anymore.  After a trip to a French restaurant a few weeks ago with colleagues, during which I jealously eyed their French onion soup, I decided I’d make it myself.  It can’t be that hard, right?  It’s just onion and some stock, right?  Or so I thought, until I started reading about it, and I realised that it relies on beef stock to achieve depth of flavour and also thickness.  It didn’t seem like it would be as simple of just substituting vegetable stock for the beef stock.  What I ended up doing was using a mixture of French onion stock (which seemed appropriate) and mushroom stock (for a hearty flavour), plus some extra flour for thickness (all the recipes I found used flour to thicken the soup, so I just doubled what seemed to be the going amount).

The key here is to make sure your onions are very well caramelised; I like to add a bit of balsamic vinegar when caramelising onions and I think this boosted the flavour even more but you don’t have to.  The cheese toast was the easiest to veganise – I just used vegan cheese!  (I’ve also used nutritional yeast on toast before, too, which you can see in the picture – this is just for the true nutritional yeast lovers, though).  Both ways resulted in a satisfyingly savoury soup, which was perfect for a winter day!  Just don’t make this one for Valentine’s Day or before any hot dates – your breath will be extremely oniony!