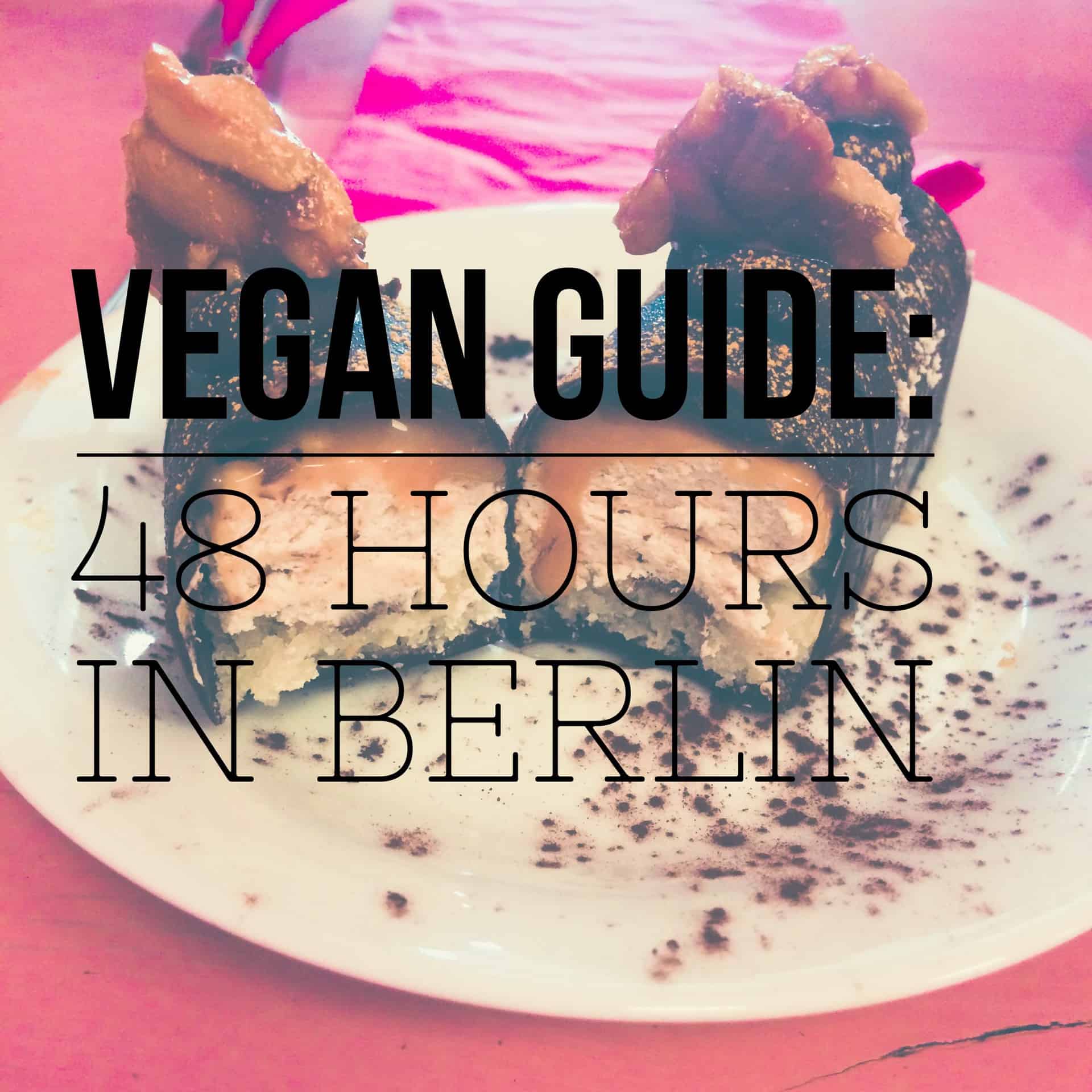 A Vegan Guide: 48 Hours in Berlin

With 42 completely vegan restaurants at last count, Berlin has such a huge range of vegan options it’s actually difficult to choose where to go (and it even has vegan hotels, too!). Compound that by only having a short time there, and it’s pretty much impossible.  Here’s your solution.

I was so desperate to try the best of the best of Berlin that I actually made a spreadsheet of fully vegan restaurants and cafes in Berlin, then added in their rankings on Happycow and Tripadvisor (and factored in the number of times they’d appeared in “top 10” listings on blogs or magazines), then ranked them based on an aggregate score. Yeah, I’m a massive vegan nerd. But it’s all for your benefit!

Here’s how the rankings panned out:

Oh, the things I do. In the interests of sampling as many of these places as possible, we packed in a lot of vegan food (and in particular, cake).  Of the top 10, we managed to get to Let it Be, Ohlala, Vaust Braugaststatte and Viasko, plus we also visited Pele Mele (for brunch) and ‘vegan street’, which consists of Veganz supermarket, Avesu shoes, Deer Goods (vegan clothes shop), and Goodies Cafe.

Read on for more information about each.

This vegan creperie is the top vegan place in Berlin, according to my Tripadvisor/Happycow/blog ranking system. A fully vegan creperie? Yes please! As soon as I got to Berlin, I rushed off the plane, dropped my bags at the hotel and hopped on a train to Let it Be. It was very exciting to see a full menu of vegan crepes, from sweet and savoury and including sides (apparently their vegan mac and cheese is amazing, though I didn’t get a chance to test it this time).

I was a little disappointed not to see a vegan nutella crepe, but I settled for the cinnamon sugar crepe, which smelled and tasted like Christmas. It was huge and very satisfying. I didn’t get a chance to try their savoury crepes but they sounded excellent, too. All of the crepes on their menu are named after famous vegans, which is a cool idea. 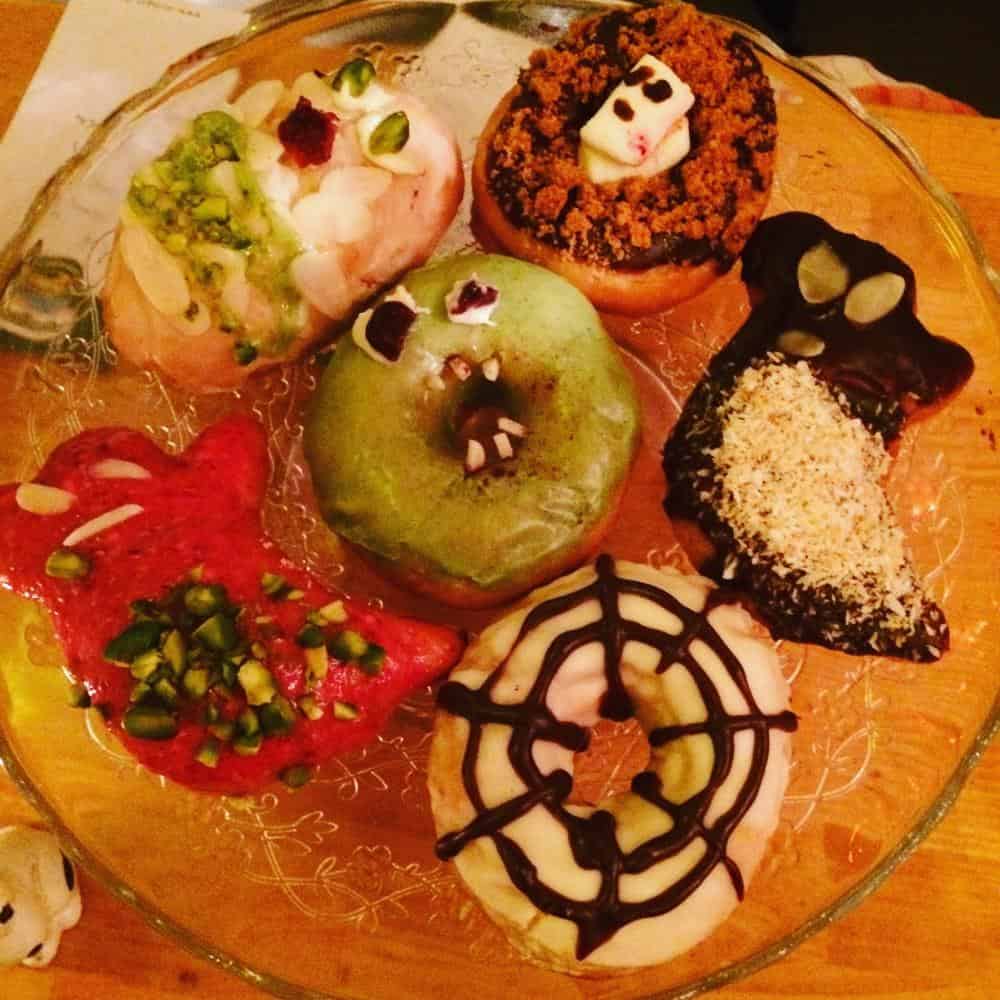 I was really excited to see these Halloween donuts at their counter display. I don’t know if they always have donuts but these were really good and were a great Halloween surprise to bring my friends, who flew in after me and therefore missed the Let it Be experience. 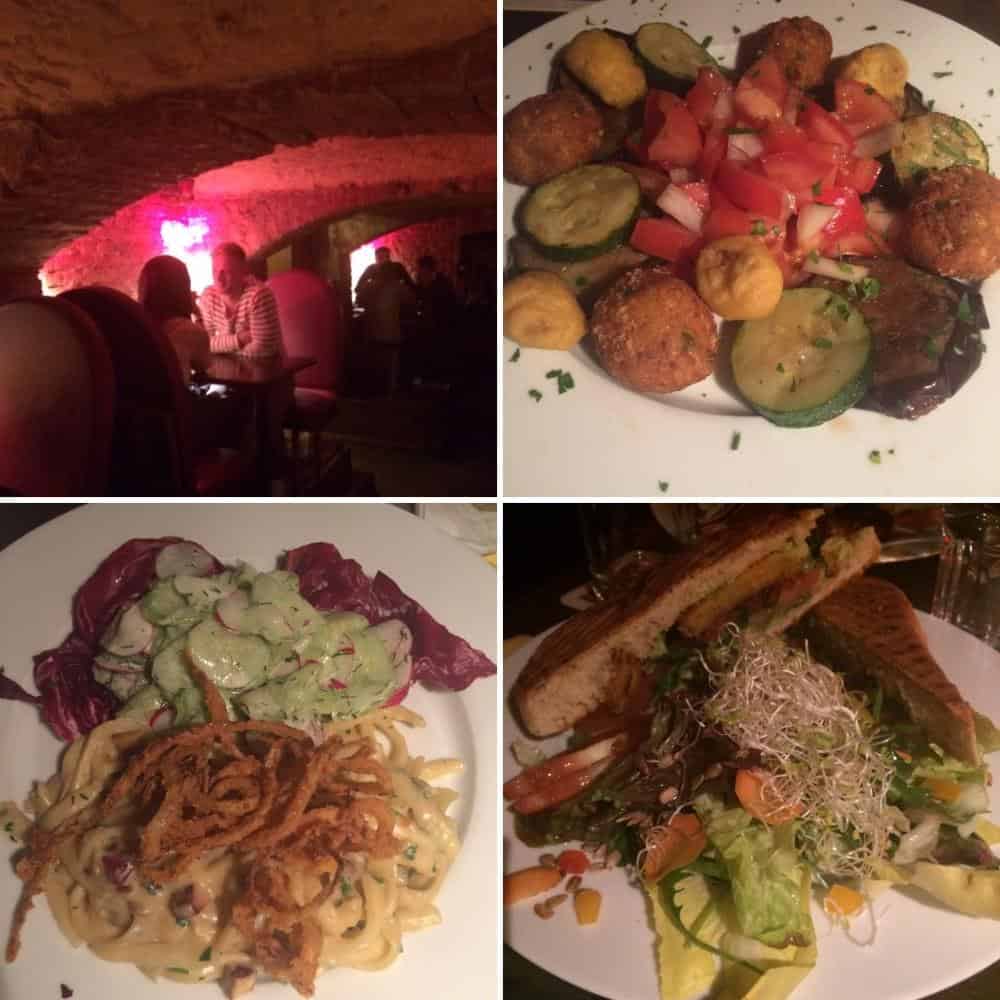 Viasko offers a menu of mainly German specialties, so it’s a perfect place to check out if you want to try veganised versions of typical German dishes. The restaurant has a very unusual layout, with part of the restaurant in what looks like a converted wine cellar – which has great atmosphere but can’t comfortably accommodate four at a table, as we found out (we were very squished)!

I settled on a cheese spaetzle, because it sounded slightly unusual and I’d never had spaetzle before. After 45 minutes of waiting we finally enquired and were met with a little bit of hostility until the waiter discovered that the order was lost. They gave us a free plate of starters, which made up for the wait but not really for the hostility.  The starter included some delicious jalapeno cheese balls, which were excellent and made me kind of glad our order had been lost – though we were starving at this point, so anything would have tasted good. The cheese spaetzle was also delicious, and came with a side of some sort of cole slaw-esque salad, which was also good – but the whole thing was very heavy. So it goes with German food, I guess!
Viasko: website 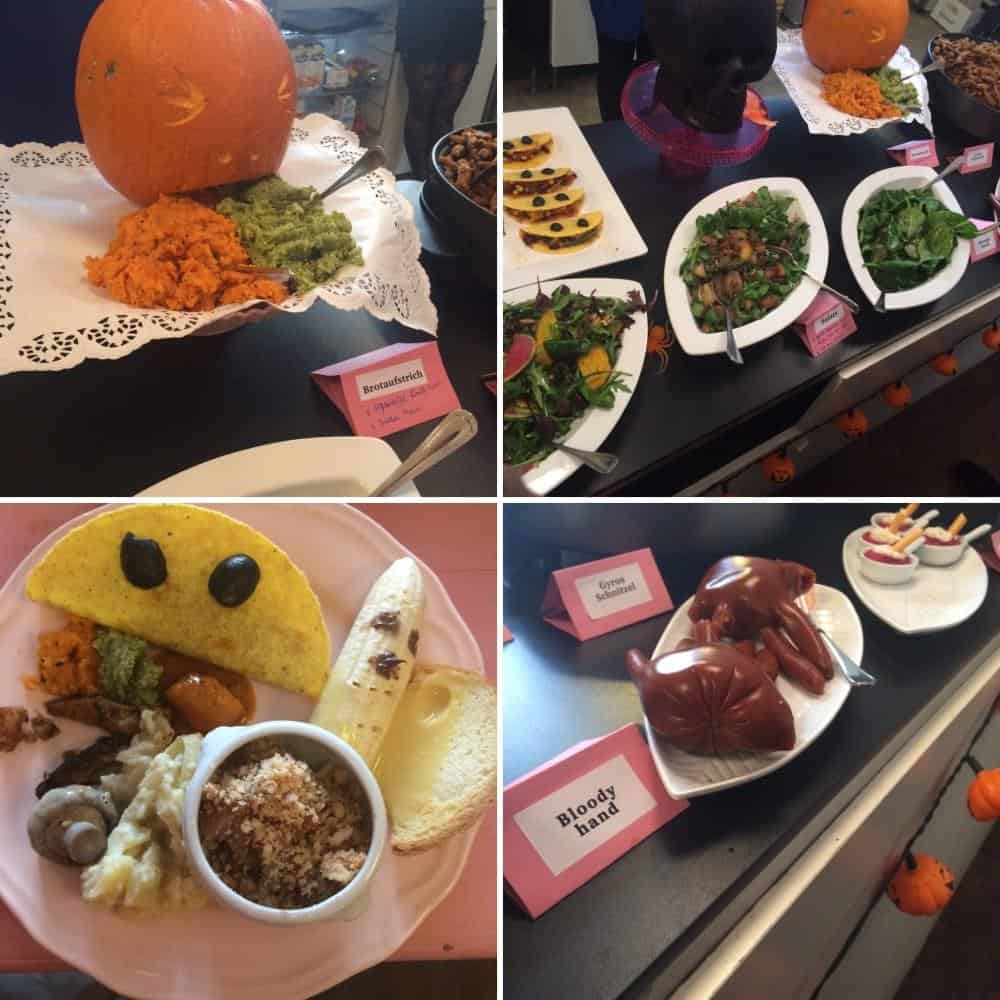 The day we were there, they were doing a special Halloween-themed brunch: tacos, spreads (which in the display were being puked out of a pumpkin), a white chocolate fountain, smoothies, several mock meats, potatoes and more. Being a pastry shop, we decided to also sample some of the cakes. 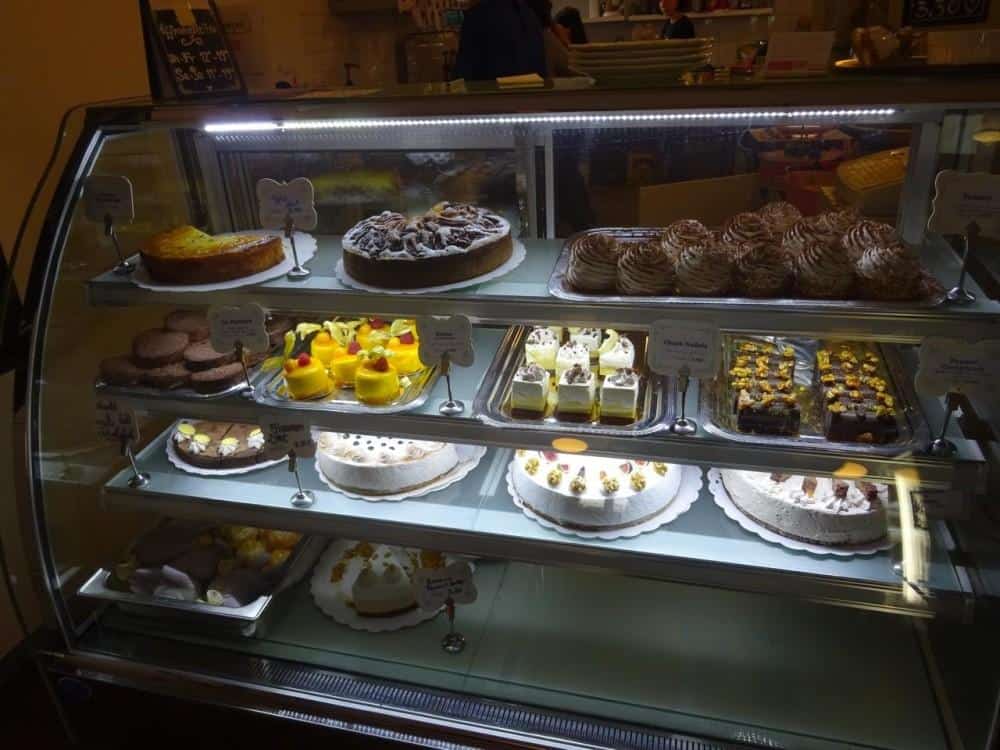 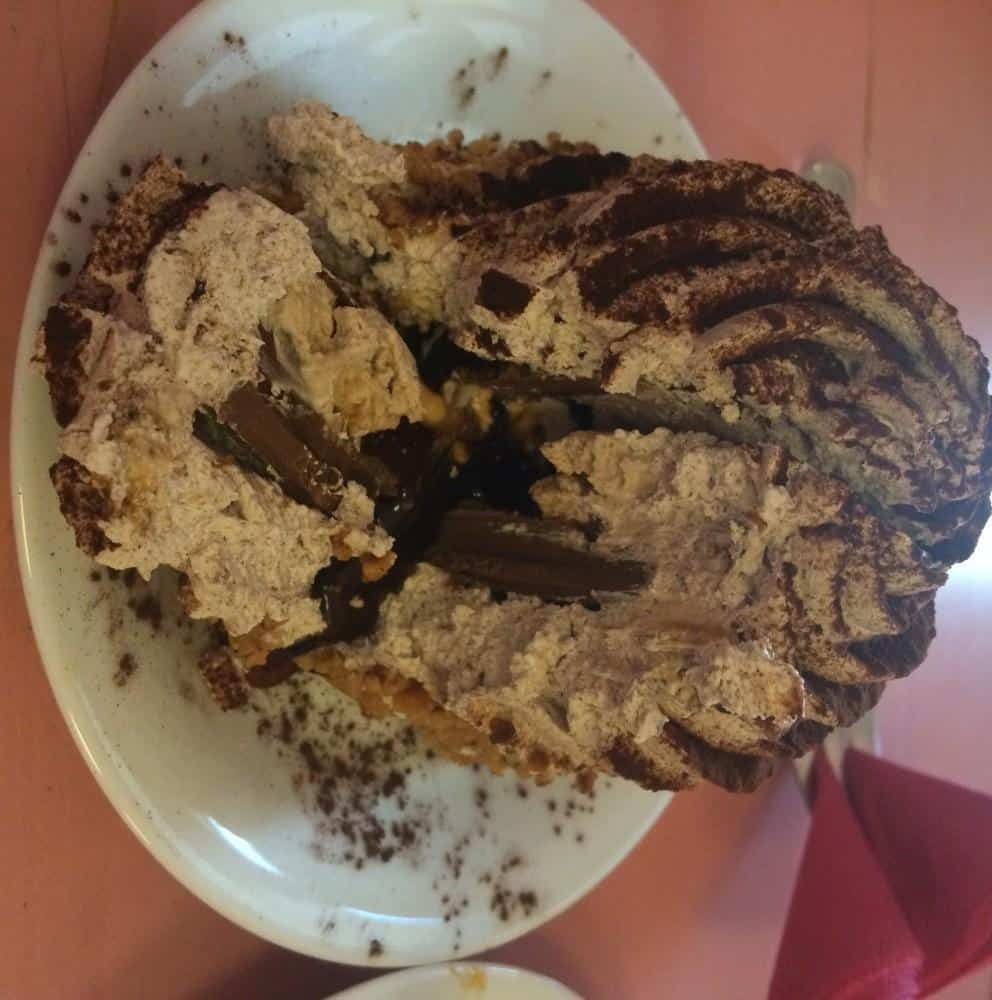 The chocolate cake was a little bit dry, but the Tresor was one of the most amazing desserts I’ve put in my mouth in a long time.  It seemed to consist of a little dome of molded chocolate, covered in whipped cream and with cherry sauce inside, which spills out when you cut into it. I think it had hazelnut in there too. Kind of like the most amazing Ferraro Rocher thing ever. 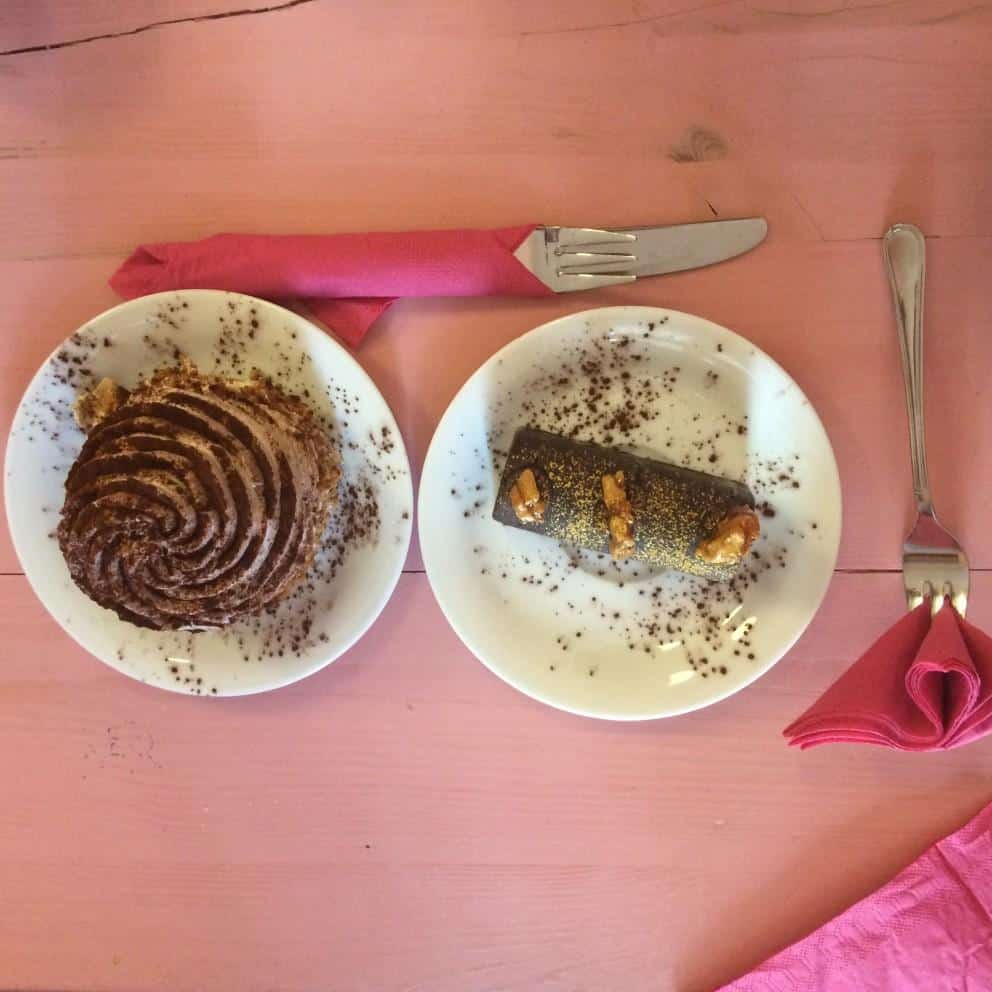 The Peanut Conspiracy, the little chocolate peanut butter and caramel chocolate bar on the left was also amazing. Kind of like a fancy Snickers bar with cream inside, but a million times better. 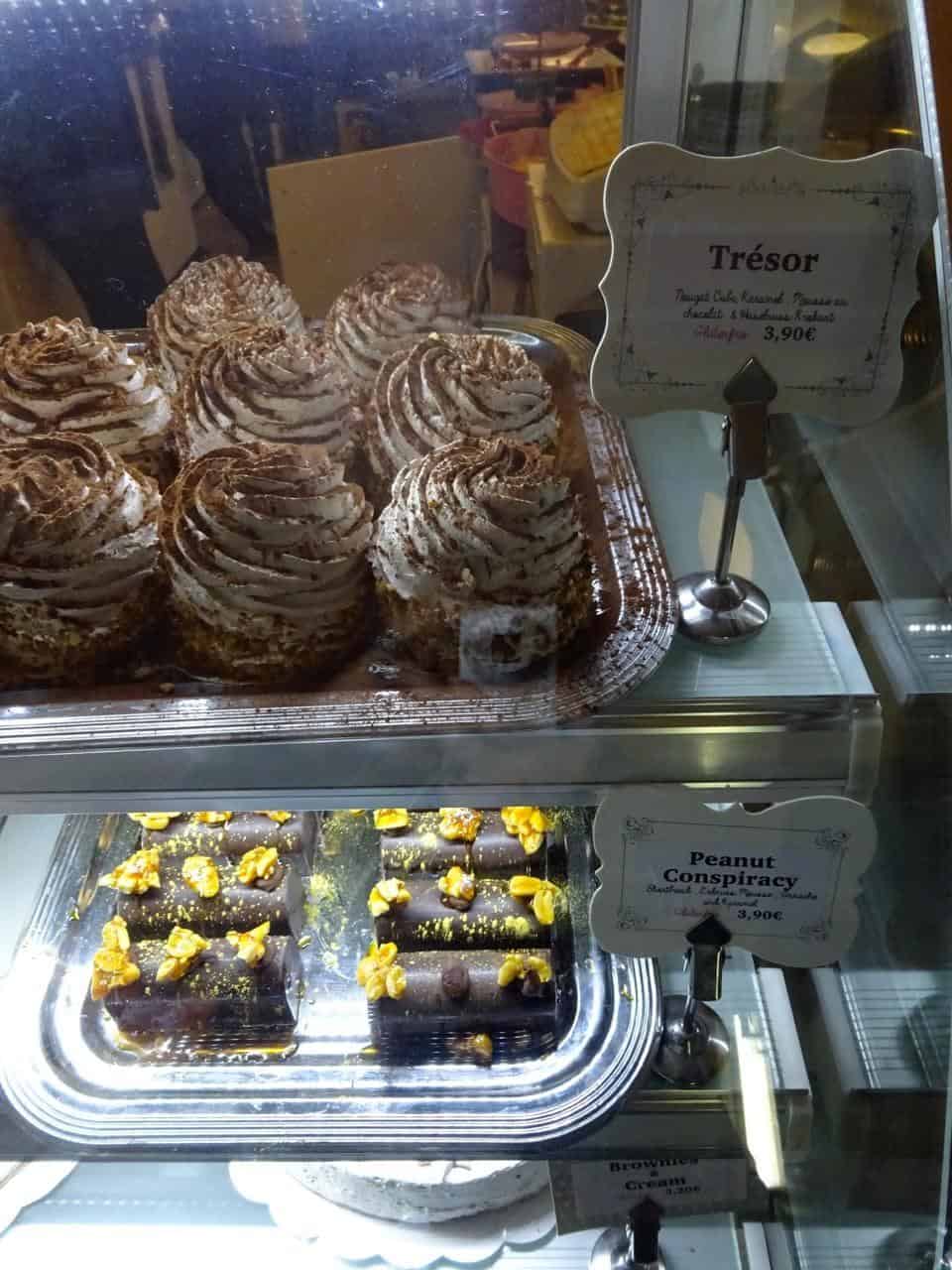 Go to Oh la la. Get the Tresor. You won’t regret it. Although you might not be able to eat for the rest of the day. 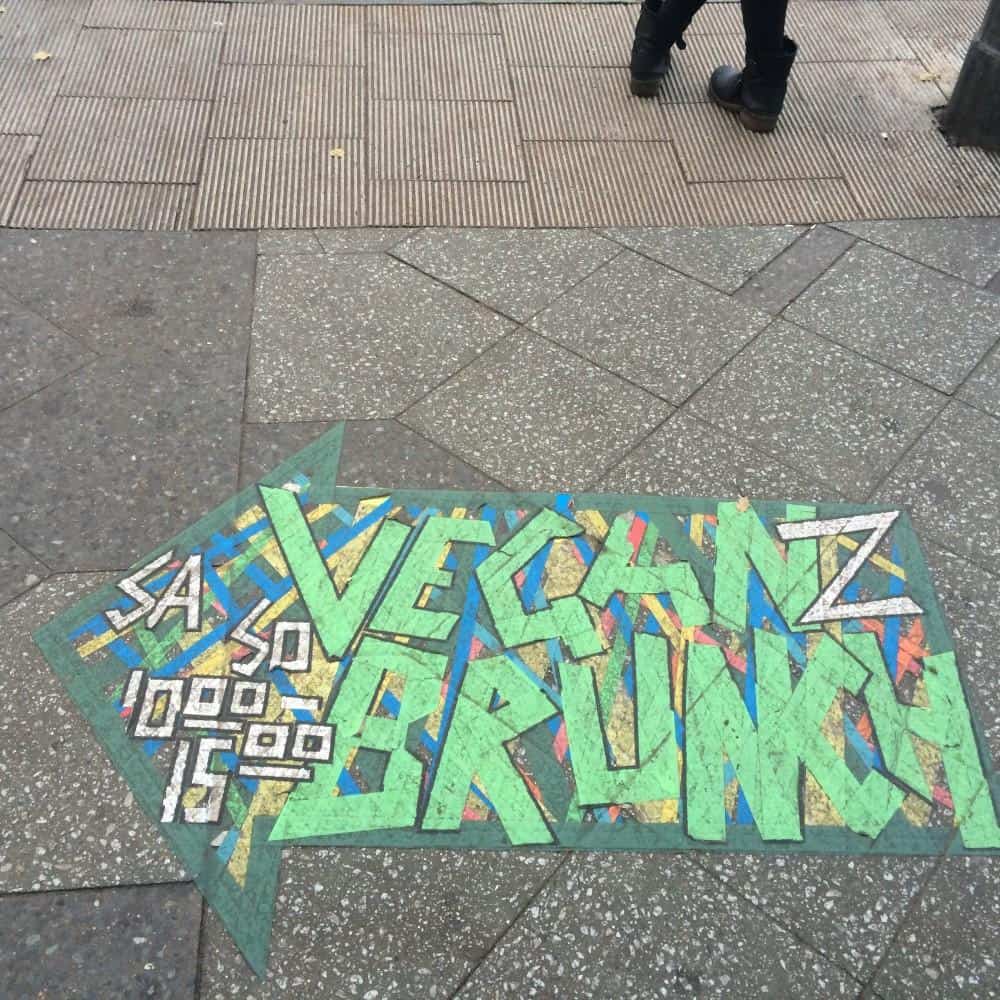 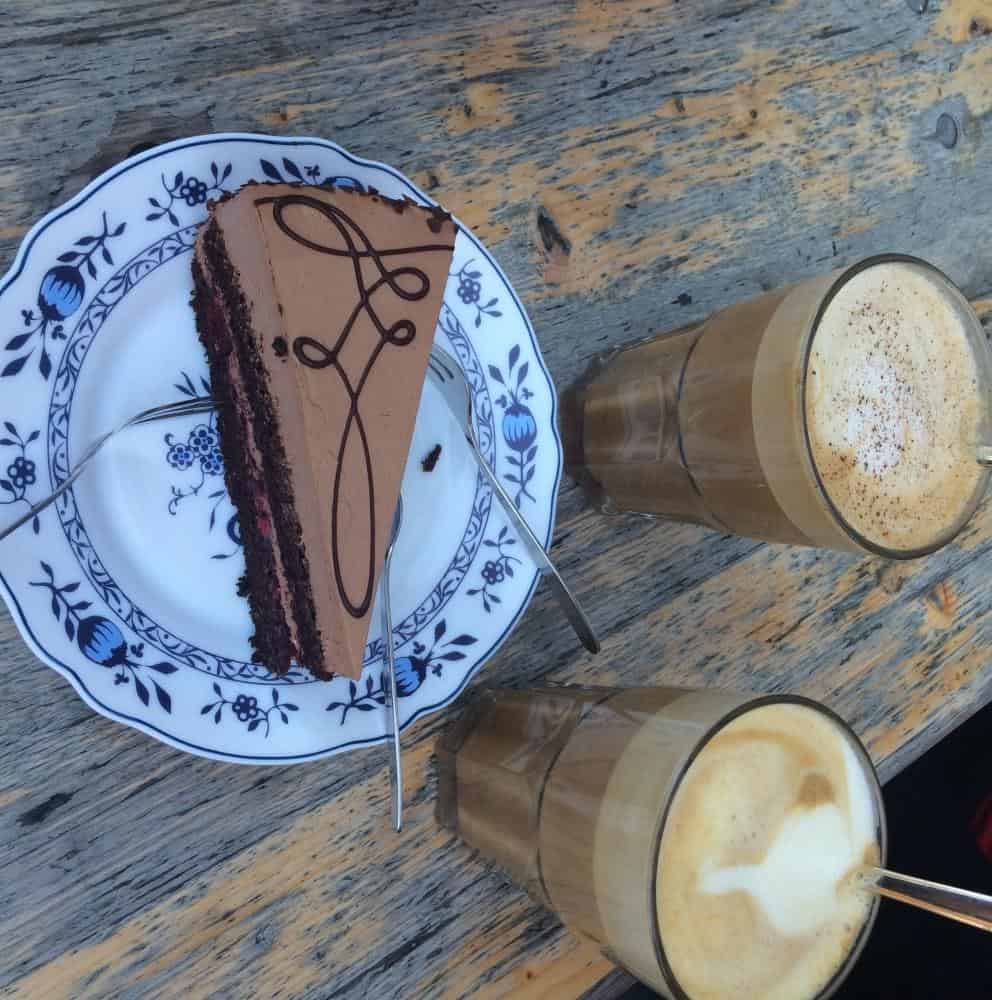 Berlin is home to a vegan shopping street around number 35 Schivelbeiner Straße, which has Avesu, a vegan shoe shop, Deer Goods, a vegan clothing shop, and Veganz, a vegan supermarket with the attached Goodies Cafe.  Goodies offers coffee, tea, smoothies, cakes and a few savoury options. We sampled a black forest cake and their speculoos and chocolate peanut butter lattes.  The cake was light and moist and very good – the lattes not so much. They didn’t have much flavour, either in terms of coffee or the flavourings.  Stick to the cake here, folks. 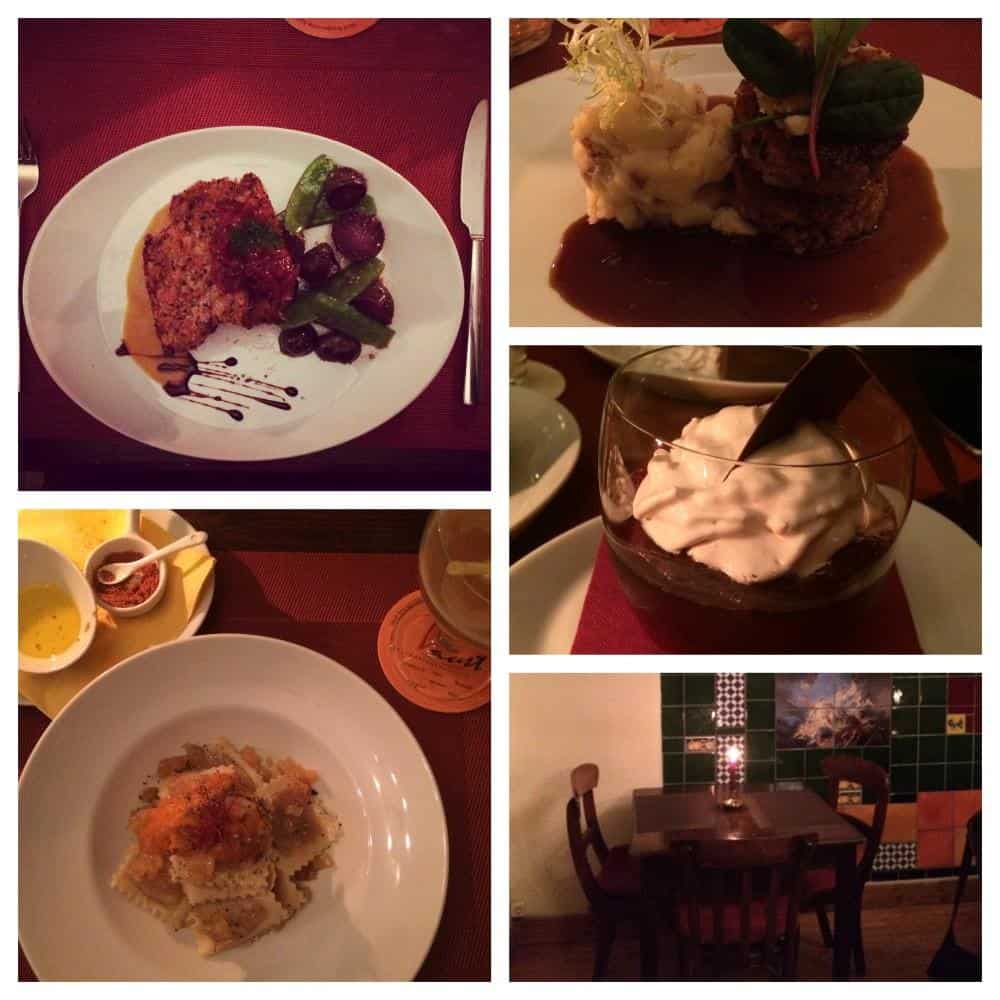 A microbrewery and 100% vegan restaurant, Vaust Braugaustatte was the top ranked restaurant (rather than cafe) on my list and it is well worth a visit. The menu is limited but inventive and interesting, and the food is on par with some of the best vegetarian restaurants I’ve been to, from Candle 79 in New York to Terre a Terre in Brighton.  The atmosphere is lovely too, relaxing and candelit. Perfect place for a special occasion or a splurge meal.

As I said, the menu is very small, with only two mains and one special (plus starters and desserts) the night we visited. So, we managed to sample all of the mains. We were given bread to start, made from the remains from the beer brewing process (which I thought was a very clever idea and good re-use of food ‘waste’) with rapeseed (canola) oil and a BBQ spice mix. The main I tried was the incredible pumpkin ravioli, which the menu describes as “Filled pumpkin ravioli with hokkaido-pear-chili-mousse, chili-strands, pumpkinseeds parmesan and caramelized pieces of pear.”

If you’re in Berlin, definitely go to Vaust!
Vaust: website 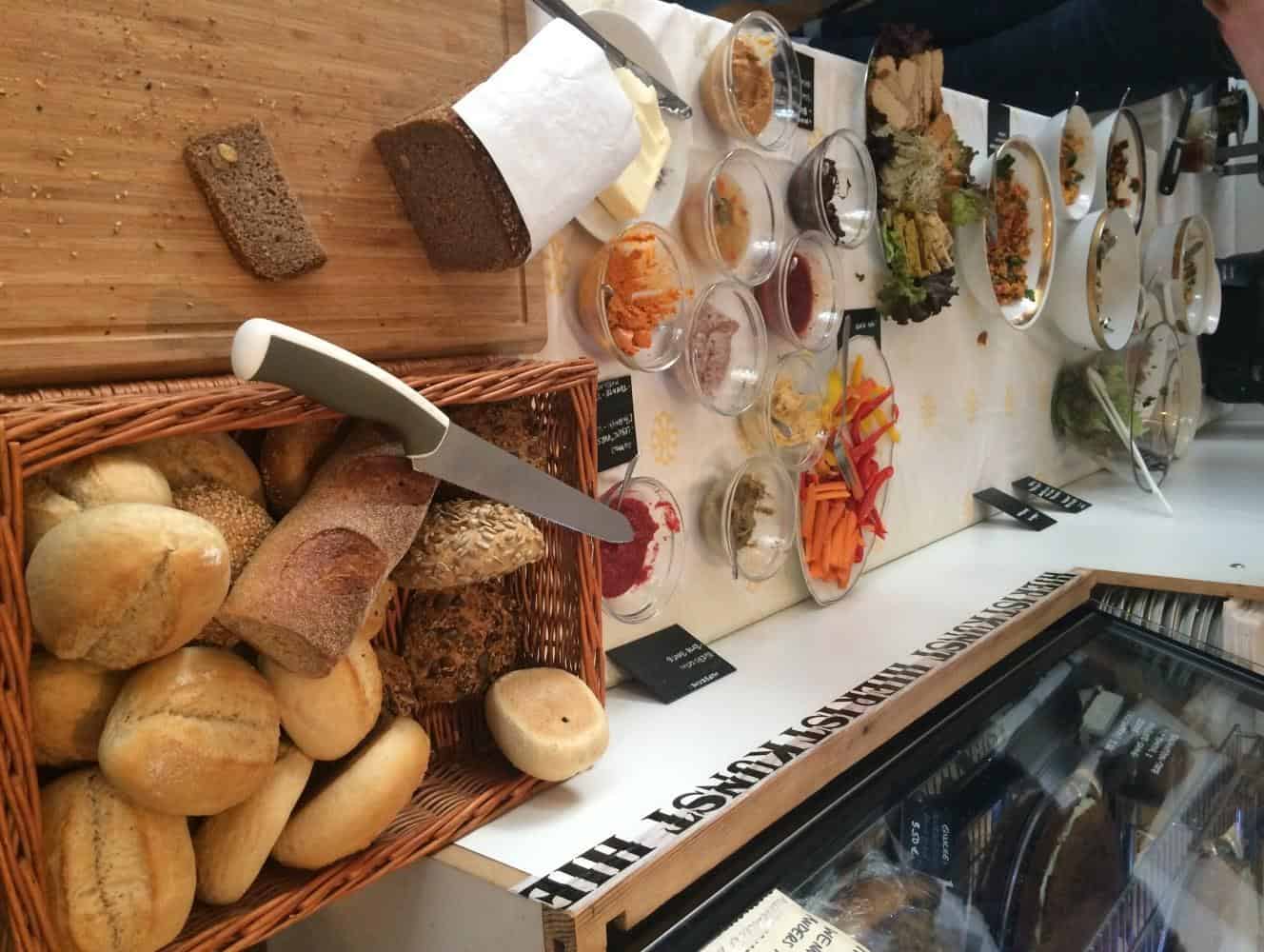 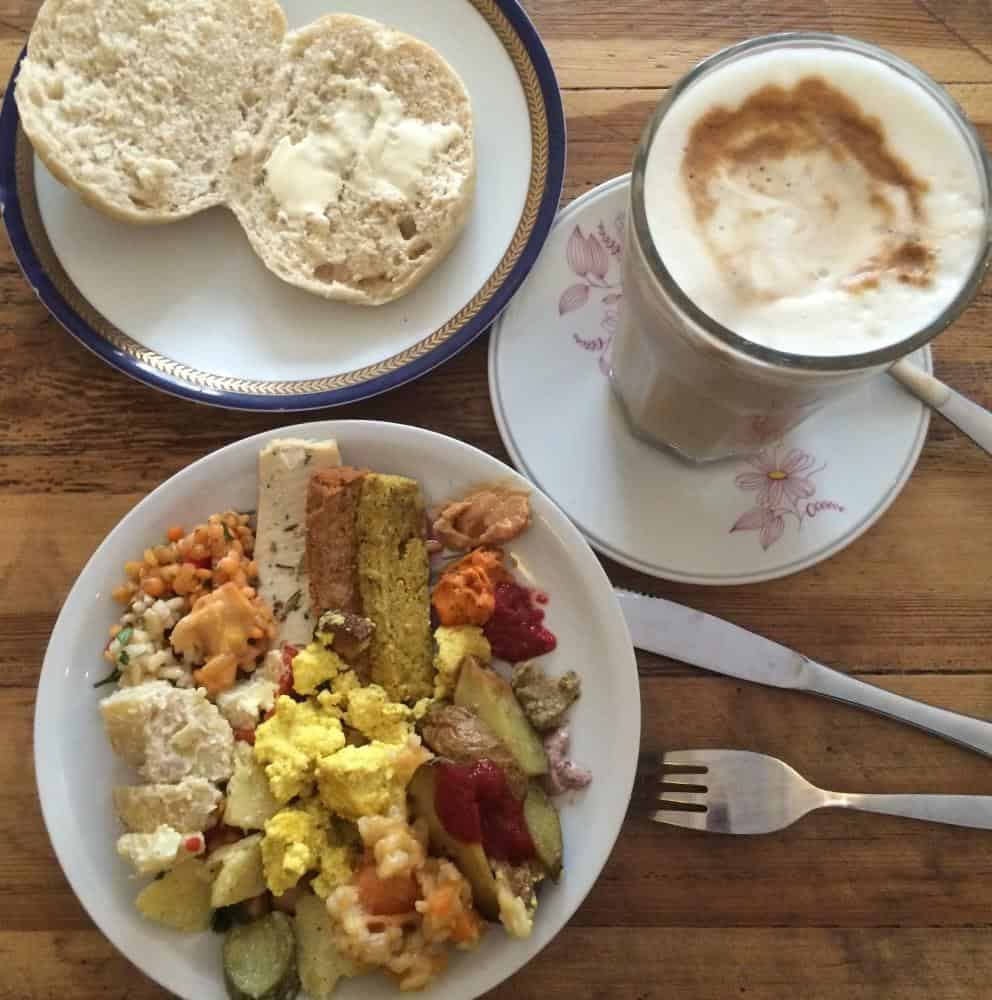 Like Oh la la and many other places in Berlin, Pele Mele offer unlimited brunch and we were lucky enough to join Nicole and Josh for brunch there on our last day.  Pele Mele has a big brunch spread, ranging from about a dozen different dips (just be careful because there’s a chocolate one next to the savouries!) and breads, to tofu, salad and more.  They were also extremely nice and when I asked about getting a takeaway bagel for the plane, the woman working told me to just take more of the unlimited brunch – free – and wrap it up for takeaway for the plane!
Pele Mele: website

48 hours is clearly not enough to explore Berlin’s vegan scene.  I would have also liked to visit:
Sfizy Veg, a completely vegan pizza place, Daluma, a newish healthy restaurant, and Chaostheorie, a vegan cocktail bar and restaurant.
Have you been to Berlin? Where else would you recommend? If you only had 48 hours, would you swap any of these places?