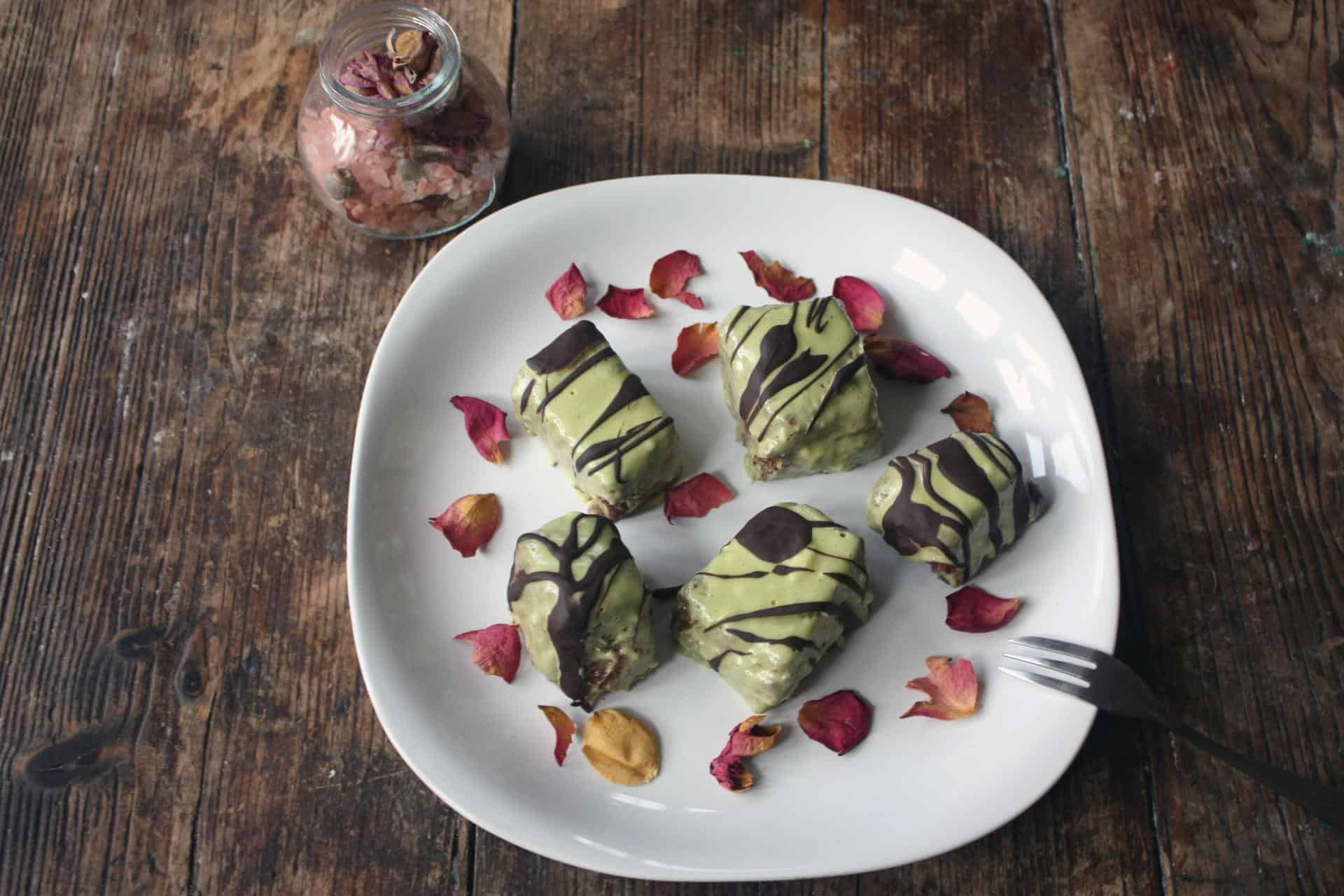 This is the penultimate recipe in my Veganising Great British Bakeoff series. Having never watched the series before, a flurry of social media postings about vegan baking this series prompted me to tune in. Unfortunately, as it turned out, there wasn’t any vegan baking in the show; one of the contestants did a vegan challenge a few years ago and enjoys vegan baking now but none of his bakes on the show were vegan. Instead, a friend challenged me to veganise Bakeoff creations, and so I ended up foraying into the field of British baking.

I’ve never made any of these dishes previously, and some of them I’ve never even tasted (I was already vegan when I moved to London in 2008, so many quintessential British baked goods have passed me by — before veganising roulade, for example, I’d never had a roulade). This week’s bake, fondant fancies, were also completely new to me. I’ve never seen a vegan fondant fancy in a shop or bakery in the UK, and therefore I’ve never tried one, but I got the idea immediately. Sponge cake, coated in buttercream, and topped with fondant.

It was only after I made the cakes that a friend informed me that normally they come with a lump of cream on top of the cake and under the fondant. Oops. Never mind, they still looked and tasted great.

For the sponge, I made a sponge cake using aquafaba. If you haven’t used this magical ingredient yet, it’s the liquid that comes in a tin of chickpea (or the water left from cooking dried chickpeas) and believe it or not, it whips up just like egg whites (really!). It was discovered in 2014, and the world’s first aquafaba cookbook came out a few years ago thanks to Zsu’s endless experimenting.

To make fondant fancies, you also need buttercream. It coats the cake to give it a smoother finish. If you just throw fondant on your cake, you’ll get a lumpy appearance around the sides and tops. Not that that matters as long as it tastes good! Still, it adds some extra deliciousness to the cake. :) I used a chocolate buttercream based on the recipe from Vegan Cupcakes Take Over The World and substituted salted caramel flavouring for vanilla extract.

And for the fondant (the final layer of icing), I added salted caramel flavouring (Tesco own brand is vegan). I also added green food colouring (again, Tesco own brand green is vegan – some of the other colours too though I’m not sure which ones, check out your favourite supermarket’s vegan list to see which of the supermarket’s products are vegan), and topped it with melted chocolate drizzle.

The recipe I used called for the fondant to be broken down in a mixer with added water, but this caused my fondant not to fully set until it was put in the fridge (and it went soft again after being taken out). I’d suggest you use the absolute minimum amount of water to get your fondant smooth! Though if your fondant ends up a bit soft, don’t worry. It will still taste great.

You can either bake your cake in two 6-inch cake tins (as recommended) or break with the rules like me and bake it in a bigger 8-inch tin. (Or possibly even a 10-inch tin although I suspect that would result in a flat cake.) Not knowing the size of the cake tin we have, this resulted in the following conversation with my flatmate:
“What size cake tin do you think this is? An average sized penis? An above average one? Or a GIANT ONE?”
We eventually broke out the measuring tape, although that wasn’t as amusing as trying to guess.

Be prepared for your kitchen to look like it’s been hit by an icing explosion. I tried to snap a picture for you but unfortunately I’d cleaned up enough of the mess for it no longer to look impressive, but suffice to say there was green fondant icing on pretty much every available surface, and parts of the walls. 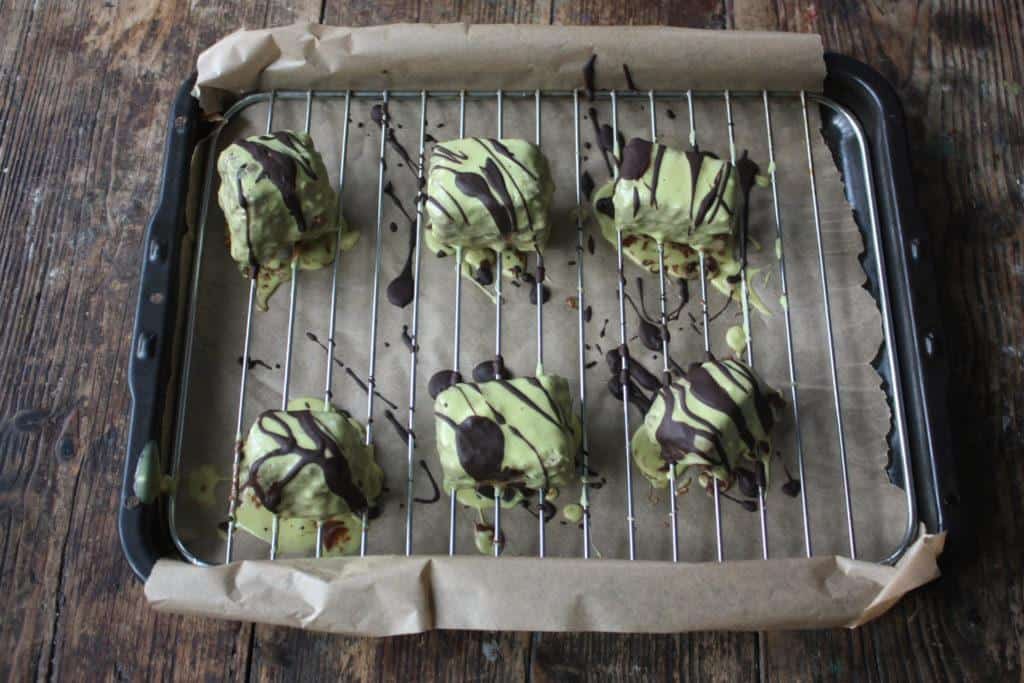 Yields 6
Two layers of vegan vanilla sponge cake coated in chocolate buttercream and covered in salted caramel fondant
For the vanilla sponge cake
For the chocolate buttercream frosting
For the salted caramel fondant
Add ingredients to shopping list
If you don’t have Buy Me a Pie! app installed you’ll see the list with ingredients right after downloading it
For the sponge cake
For the buttercream frosting
For the fondant
To assemble the fondant fancies
Notes
Print
The Vegan Word https://theveganword.com/