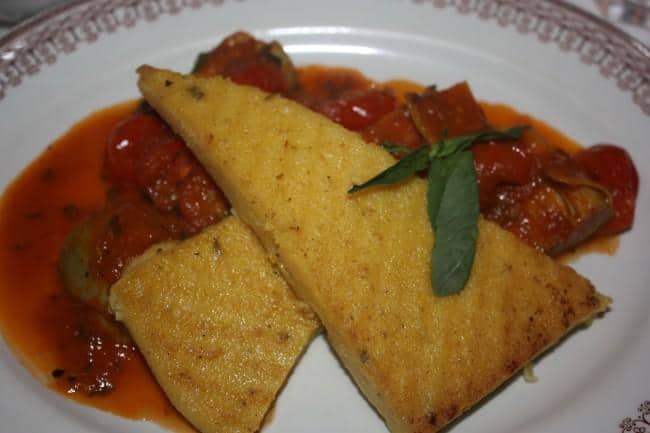 After I read recently on the Vegetarian London Guides facebook group about the opening of not just one but two new vegetarian pubs in London, I felt compelled to try The Coach & Horses pub in Soho.  The pub was filled with patrons singing along loudly to live piano when I arrived (!), and if I hadn’t been with a friend I might have left without finding the dining area.  The dining room is hidden upstairs (there’s a small, inconspicuous sign behind the bar, which my friend luckily spotted, but it would be easily missed).  The dining room is cute and kitschy and filled with old china and photographs and general tat.  Unfortunately the cuteness could not make up for the entirely lacking food.  I hate to post such a negative review of a new vegetarian restaurant, but I wouldn’t want to recommend a place that we found so disappointing.

Although the Vegetarian London review mentioned several vegan entrees, the waitress seemed unaware of this, and informed us that the only vegan options were the puy lentil salad and the tofush and chips.  After I enquired further about the portobello mushroom burger and the polenta, the waitress said she’d ask the chef.  When she returned, she said those two mains could be veganised if we wanted.  So, I had a puy lentil and Jerusalem artichoke salad to start.  It was probably the most interesting of the three courses, but didn’t bowl me over.  While my friend was disappointed with the small portion sizes, I was actually pleased although I thought for the price was a bit much considering the sizes (£14.95 for two courses, £19.95 for three).  The puy lentil salad: 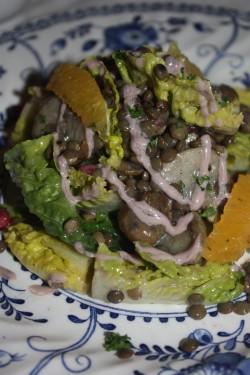 As a main, I had the polenta with cherry tomatoes and artichokes (pictured above the article).  I was happy when I could hear the chef frying the polenta in the back — that meant it would be fresh!  And the polenta was indeed fresh, but the cherry tomatoes and artichoke hearts which accompanied it were fairly bland and boring.  When I go out for a meal, I like to try something I couldn’t make at home, and I felt this meal would have been easy to recreate at home.  Perhaps they were going for homecooked style to fit in with the kitchsy, cutesy vibe, but I was disappointed.

To finish off the meal, we had the kaffir lime tart, which normally comes with ice cream.  Unfortunately they didn’t have sorbet or vegan ice cream and we weren’t offered anything in its place.  The tart’s base was boring, and while the tart was nice, I didn’t feel it made up for the plain base. The tart: 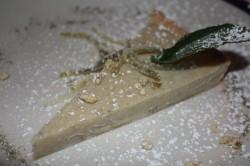 Overall, the meal was nice, but nothing special, and certainly not worth £19.95.  It’s really great that there are finally vegetarian pubs in London, but I was disappointed with The Coach & Horses.  They’re going to have to up their game if they want to survive in Soho (aka vegetarian heaven).  In the meantime, I’m holding out hope for The Smithfield Tavern, the veggie pub in Farringdon — next up on my list of new places to try!

Click here to get your FREE copy of the Vegan London Travel Guide!